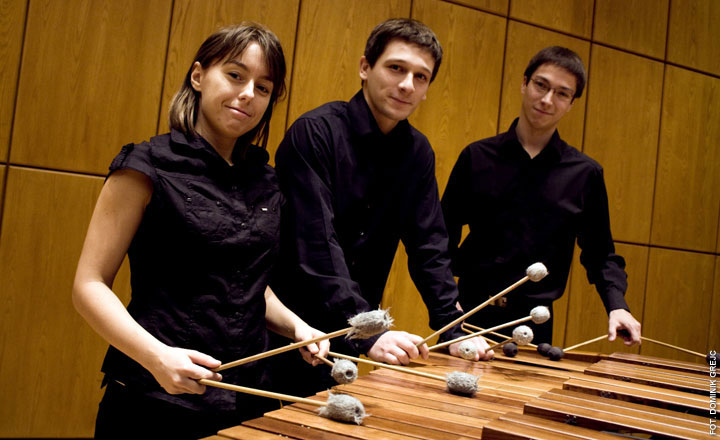 Amadrums Trio consists of Wiktoria Chrobak-Mielec, Rafał Tyliba and Maciej Hałoń - all musicians studying at the Academy of Music in Cracow in the percussion class of Jan Pilch and Stanisław Welanyk. The group has been working together since 2007 and has already acquired a fine repertoire that includes works of contemporary percussion literature written for a multitude of instrumental groups, compositions with the elements of musical theatre, electronics, pieces in a similar style to jazz, as well as their own compositions.

Since its very beginnings the band has performed at a number of renowned musical festivals, both international and Polish ones, such as 'Sounds New' in England, 'DAM Festival' in Kosovo, 'Nagyerdei Ősz' in Hungary, 'Warsaw Autumn' - International Festival of Contemporary Music, Percussion Festival 'Sources & Inspirations', 'Audio Art Festival' and 'Sacrum Profanum'. Amadrums Trio specializes in contemporary and popular music. Although being young art adepts, the members can already boast a number of premier performances of several Polish works, some of which have been written especially for them. Amadrums Trio is the winner of the Grand Prix Award and 'Sound New' Award of the XIVth International Competition of Contemporary Chamber Music and First Prize Award of the II International Master Competition for Music teachers. During the concerts, the audience has an opportunity to listen to works that combine elements of various cultures. The Trio purposefully chooses pieces that reflect the eclectic mixture of styles and fresh inspirations.